By Josh TateSeptember 25, 2022No Comments

Pastor Bob Roberts Jr and his two other Multi-Faith Neighbors Network co-founders (Imam Mohamed Magid and Rabbi David Saperstein) was honored to receive an award for their grassroots bridge building work around the US during the United We Stand Summit on September 15, 2022 at the White House.

MFNN was highlighted and honored during the bipartisan summit for coordinating grassroots movements with religious leaders across various faith traditions. MFNN builds mutual trust and respect among faith leaders through civic engagement, authentic relationships, and honest dialogue leading to compassionate and flourishing communities more interconnected and resilient to hate, violence, and polarization – all while never sacrificing each faith tradition’s unique theological identity. The MFNN mission is to work cooperatively across faith traditions, even in the midst of often irreconcilable theological differences, so that faith leaders would mobilize their congregations to serve their communities in order to model the kind of society that all of us are trying to build – one where community, cooperation, and the common good are lived out. 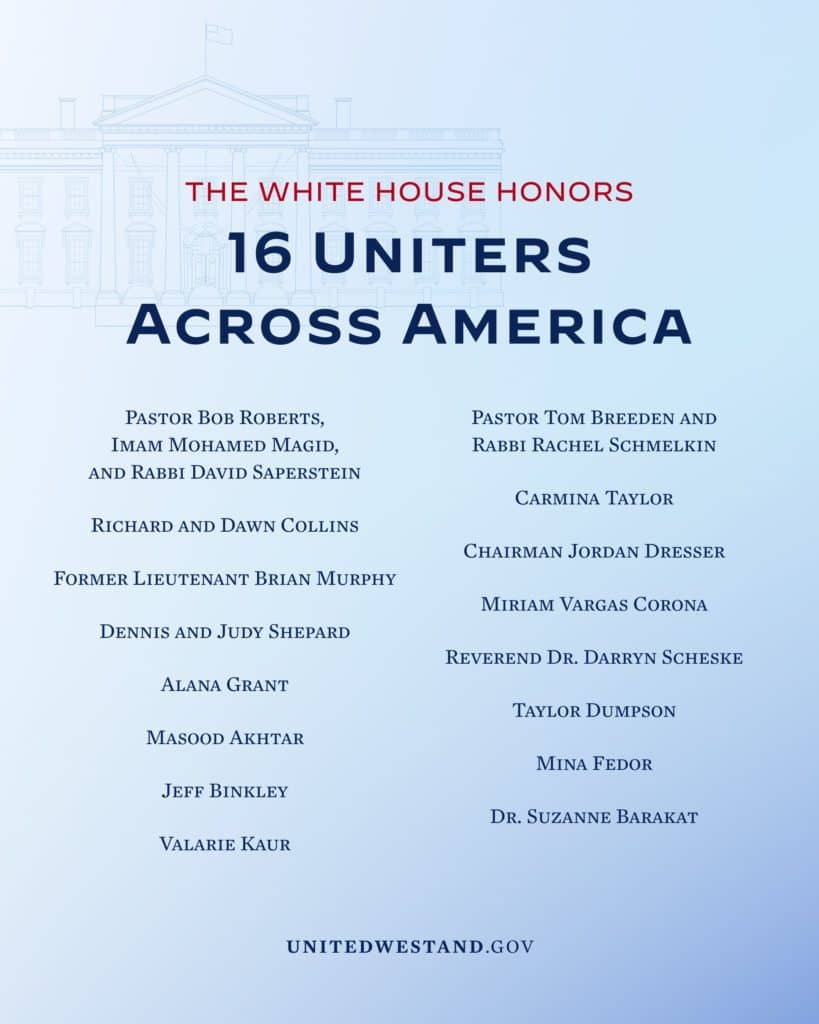 The “Uniter” award was presented to select Americans by the White House for working to bring their communities together across lines of racial, religious, political and other differences to prevent acts of hate-fueled violence, promote healing where such violence has had devastating consequences, and build unity.

“What an honor it is to be recognized as a Uniter for the grassroots work MFNN is doing across the nation,” said Roberts. “Our multi-faith coalition is a model for how faith leaders can find common ground and create change for the good of our community despite significant differences theologically or politically. In a time of polarization that seems to be tearing America apart, faith communities should show others how to bridge divides by working together and better loving our neighbor.”

The United We Stand Summit was an event that brought together bipartisan “Uniters” from across America. Americans of all backgrounds, beliefs, and political affiliations remain overwhelmingly united in their opposition to hate-fueled violence. The Summit featured bipartisan panels and conversations on countering hate-fueled violence and preventing mobilization to violence.

See the official release from the White House here.