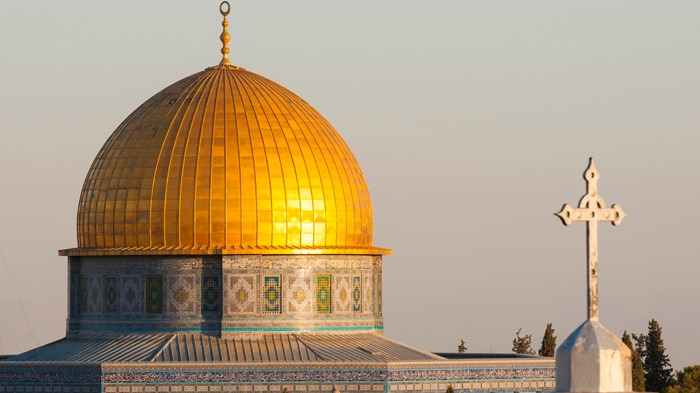 Image: Joel Carillet / Getty Images
The Dome of the Rock, an Islamic shrine, and the cross of a church in the old city of Jerusalem.

It is not often that a Muslim appears at an evangelical theological gathering.

The trimmed-down 72nd annual conference of the Evangelical Theological Society (ETS), held virtually this week, usually welcomes up to 2,000 top scholars to present on the most salient issues facing evangelical scholarship.

This year’s theme: Islam and Christianity.

“We are called to truth, and to understanding the world around us more accurately and thoughtfully,” said Mohler, president of Southern Baptist Theological Seminary (SBTS), who also served as ETS program chair.

“That certainly includes our understanding of Islam, which has from the beginning represented an enormous challenge to Christian evangelism, apologetics, theology, and cultural engagement.”

Roughly 15 percent of the 130-plus events addressed these challenges, including the three official plenary sessions—in typical academic parlance:

But it was the challenge of “cultural engagement” that led ETS to reach out to the Muslim panelists. Each was invited to share their view of evangelicals, and address the issues that concern them. It could “scarcely be more relevant and urgent,” said Mohler.

Three Christians joined them on the panel, focused on“Understanding Our Neighbor.”

“We don’t resist the idea we must love Muslims,” said John Hartley, a research fellow at Yale, “but we hesitate and keep silent, because the politics is so messy.

“This leaves the field open for those who spread hate.”

Asma Uddin, a religious liberty lawyer (previously interviewed by CT) and a fellow with the Inclusive America Project at the Aspen Institute, described the well-funded Islamophobia network that tars Muslims and the political left in a joint conspiracy to take over the world.

The effort seems to be working.

And according to the 2019 American Muslim Poll, only 20 percent of white evangelicals had a positive opinion of Muslims, with 44 percent feeling unfavorable.

Only 14 percent of Muslims had an unfavorable view of white evangelicals, with one-third feeling favorable—but the damage has been done.

“Political tribalism drives how these communities see each other,” Uddin said, “and Muslims view evangelicals as intrinsically linked to the Trumpian other.”

It was not always this way.

Hamza Yusuf, cofounder and president of Zaytuna College in California, the first accredited Muslim liberal arts college in the United States, said strong Muslim support for George W. Bush helped him to the presidency in the razor-thin 2000 election.

But after 9/11, Republicans “anathematized” them.

“Muslims had a huge shift to the left in response to the love showed them by Democrats,” he said.

“It changed the dynamics of our community.”

But being a religion of jurisprudence, Muslim obligation remains.

When Jesus was asked, “Who is my neighbor?”, he told a story.

Islam, Yusuf said, defines the neighbor as up to 40 houses away.

Mohamed Majid, imam and executive director at the All Dulles Area Muslim Society (ADAMS) Center, in Virginia, is going much further.

Partnering with Baptist pastor Bob Roberts, he has traveled to Pakistan, Uzbekistan, and other Muslim world hotspots to promote better treatment of minority Christian communities.

But when invited to Roberts’s Texas, Majid said that local pastors politely asked not to be pictured with corresponding imams.

After three days of ta’arruf—the Arabic word for “getting to know each other”—they volunteered to exchange visits in each other’s houses of worship.

“We have so much in common with evangelical Christians,” Majid said.

“But to be true to our faith we have to get out of our comfort zone—which makes us better believers.”

Hartley agreed with the common evangelical dodge that says not all believers are called to engage Muslims in their community. But pressing the issue, he asked how many evangelical churches have appointed a deacon to do so?

Uddin, who appeared in a second ETS panel with Matthew Kaemingk of Neighborly Faith, offered political encouragement. The 2020 American Muslim Poll found 49 percent of that community willing to build coalitions with conservatives to support religious liberty.

Both she and Yusuf cited the importance of the ministerial exception, which bars the application of anti-discrimination laws to religious institutions. Muslims face many of the same culture war challenges affecting Christians, and community leaders need the freedom to impart their moral values, without fear of being sued.

If this issue can help bridge the divide, maybe it can help heal the nation?

“Evangelicals and Muslims are only a microcosm of political tribalism in America,” Uddin said. “If we can work together, it will provide a clue about how to overcome it nationally.”

But not all were pleased.

“This is nothing more than Muslim propaganda,” wrote Derek Newton in the ETS online chatroom, citing violent statements of Muhammad in the Quran.

“Why would I take the word of a lesser teacher, over the one they claim to follow?”

Martin Accad, chief academic officer at Arab Baptist Theological Seminary, in Lebanon, wished the panelists might have taken a more confessional approach toward Islamic history. Their tone was a bit apologetic, he said—though understandable in a sea of evangelicals.

But they represented “the best of Islam.”

Accad was invited to a separate panel to discuss his book Sacred Misinterpretation, describing how both Muslims and Christians view each other’s scriptures through the lens of their own. It calls for a “kerygmatic” approach, in which the good news can be proclaimed without having to make Islam look bad.

Doing so is counterproductive—and not only in evangelism.

“Showing the uglier side of Islam does not help our social theology,” Accad said. “It makes it harder for us to love our Muslim neighbor.”

Calling for evangelical leaders to normalize Islam in America, he said the only way to do so is to promote the positive image of Muslims.

Though incomplete, the image is not false.

Academics will always wrestle with the full picture. In his writing Accad deals with the difficulty of understanding who Muhammad was historically, as well as the complex textual history of the Quran. As an Arab Christian, his hope is that the scientific inquiry Muslim scholars encounter in America will filter back to the Middle East.

But while scholars engage with complexity, experience drives the perception of most Christians in the pews. Media discourse and politics must not prevent the exchange of hospitality.

“I’m willing to risk painting the positive aspects of Islam, even if it lacks nuance,” Accad said, “for the sake of avoiding the alternative—more conflict at the personal, community, and international levels.”

“My advocacy also for Christian rights lowers their feelings of threat,” she said. “This reduces the likelihood of hostile reactions, opening a space for connection.”

Even so, Uddin confessed feeling “pretty demoralized” before the conference. She grows tired of facing the same evangelical questions, often asked with hostility. But her left-leaning friends show little appreciation for the moral goodness of most evangelicals. And sometimes when speaking in front of Muslim audiences, she has been given a bodyguard.

“I want to plant a seed, so people will question their assumptions,” Uddin said.

“Perhaps the academics at this conference will now do so with the next generation.”

Mohler, in his welcoming remarks, called evangelical scholars to ever greater faithfulness to Christ and his gospel.

“When you see people suffering wounds and injustices, you go to be their neighbor,” he said.

“So many of us feel a threat to our religious liberty. Can we recognize that Muslim suffering parallels our own?”